Despite the word being in the title of this blog, my guilty secret is that I haven’t actually taken part in a sportive since 2015.

Yes, I did the RideLondon 100 last year but for some reason I have a mental block around calling it a sportive. It’s a ‘mass participation cycling event’ (whatever that means).

It feels like 2019 is the year in which this situation needs to change. Sportive-a-go-go. And where better to start than a local ride at the start of April. The RideStaffs Spring Forward Sportive.

I was encouraged to participate by the organiser, Paul, who also happens to read this blog (he tells me…).

He piqued my interest when we met and spoke about how he designs his routes (a conversation that led to my recent post about designing a great cycling route).

I wanted to test his route planning credentials in the hot crucible of a live sportive (er, what…?). So I signed up.

The Routes On Offer

The event featured two routes, short (which the lady at the start kindly called ‘medium’) and long. Neither route looked particularly scary on paper:

This was part of the appeal for me and, I imagine, the majority of people taking part. There’s a limit to how much endurance training that any normal cyclist can complete over the dark, wet and wintry months. No one wants to beast themselves with an epic ride at the start of April.

That all said, I picked the short route.

With my participation in the ride already taking me out of my kids-to-sporting-activities taxi duties, and pushing them on to my wife, I felt that spending an extra couple of hours doing the long route would be pushing my luck.

Also I needed to be somewhat compos mentis on my return. I had to put up two shelves and sign up for the village pumpkin-growing contest (don’t ask…). Safer to go short.

Back to the (summary) route analysis.

For the most part, you’d call both courses ‘rolling’. They traverse an area of mainly low farmland (primarily arable, if my keen amateur farming eye is to be trusted).

This part of Staffordshire is notable for what it is *near* (from a cycling perspective): Cannock Chase to the south (for mountain biking), Peak District to the south (for roadies and others). Part of the reason for doing this sportive was to discover what these roads had to offer in their own right.

The long route features a climb called Quarry Bank, which is relatively close to where I live but not one I’ve ridden. It was a shame to miss – it’s now top of the list for the next village MAMILride.

Both routes ended with a nice little punch in the face some 10 km from the finish.

Marchington Cliff (which is great name from the getgo) is, according to the Strava, 470m long and involves 58m of asent. Hardly Alpine but it’s a grippy little number.

An average gradient of 12% and a stretch at 14% (that’s what the sign says) would certainly give my weary quads a good tickle.

It was an early start (I had to get back for the pumpkins remember). My ride partner picked me up from our house at just gone 7am. 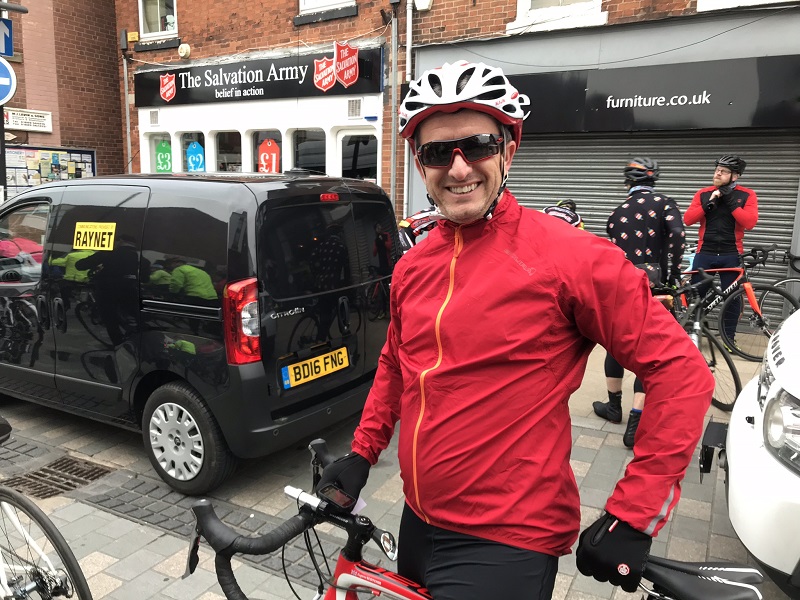 Parking in central Uttoxeter is free on a Sunday (a factoid that will interest perhaps 0.001% of my readership), so it was very convenient to unload the bikes, get shoes on, top up the air in our tyres.

Registration was something of a revelation. Or at least the location was.

Bear Coffee is (as the name suggests) a coffee shop. And one that I had absolutely no idea existed. It’s a trendy affair, with smart decor and excellent coffee. Slightly incongruous for Uttoxeter but I will return. 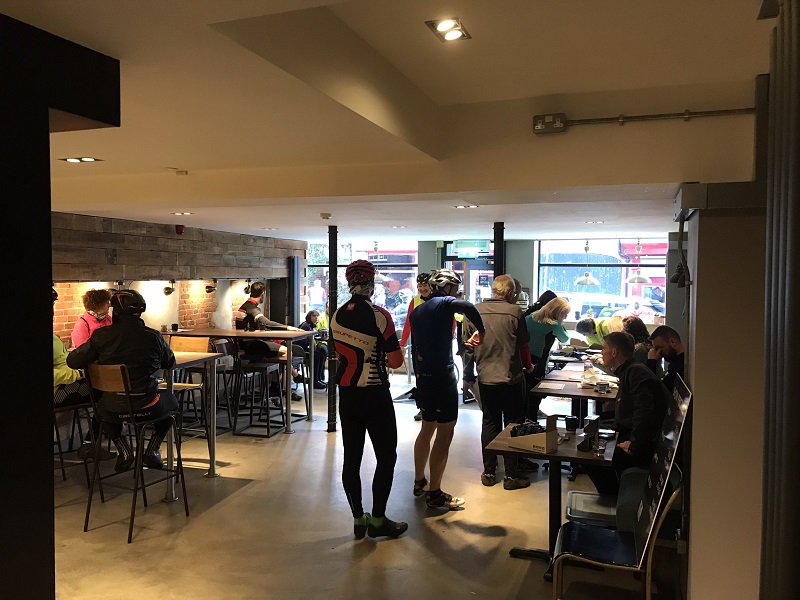 The process was as simple as having a name checked off a list and the issuance of a number and cable ties. It was over in a flash. Given we turned up at 7.30, even with a leisurely coffee, it was still a bit of a wait until riders started to be released (8.30am).

Then we had to wait for a few waves to go before we finally set off. Strava records that we set off at 8.53am and we were definitely in the chute before half past. In the future, I’d be tempted to roll up later, in order to avoid the standing around. 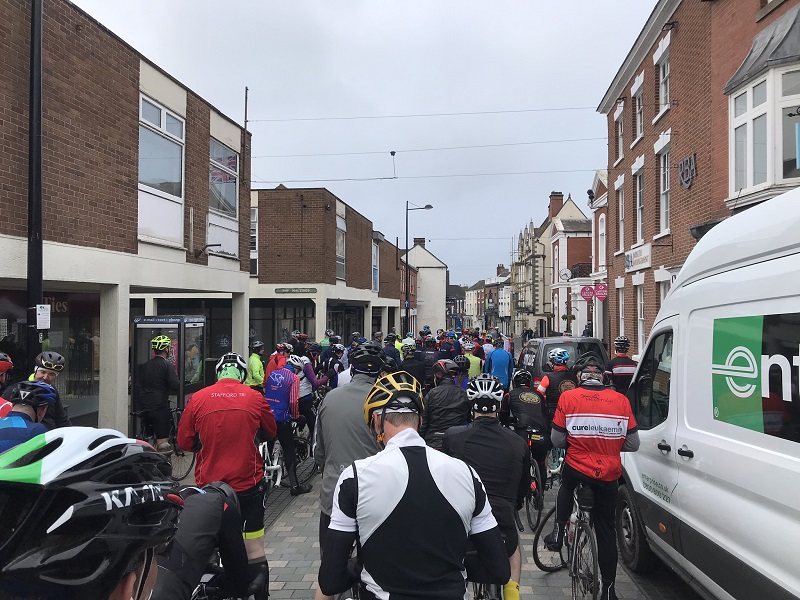 In any event, we gave it some beans up the few metres of ascent out of Uttoxeter just to warm up.

Describing a ride in words is possibly a bit tedious (although this blog is no stranger to tedium). I won’t describe in minute detail. Have a look at some of the photos, plus you can always scrutinise my Strava ride.

We didn’t stop at the first feed station. With it coming at mile 9 (on the short route), it seemed a little bit early to be taking on additional fuel. The stop probably saw more custom from the long route riders (at mile 21).

The stop was staffed by a friendly chap from KOM Fuels and his (I assume) young son, who loudly announced riders as they approached. There was a nice selection of biscuits, Jaffa Cakes (not biscuits – ask the tax man), bananas, some sports nutrition products. 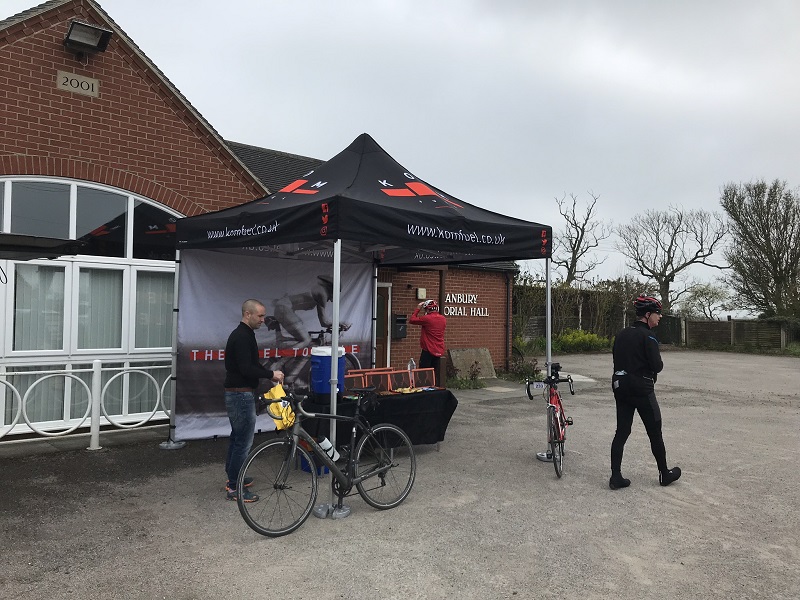 The best bit was the location – or rather the facilities. The feed stand was set up outside a village hall, with the building open to allow riders to use the toilets. I’ve done enough sportives feed stops in a facility-less car park in the middle of nowhere to know this is “a good thing”.

And just like that (after the Marchington face punch), the ride was over and we were rolling back in to the centre of Uttoxeter. The start chute had been repurposed as the finishing straight, and we duly received our cap and finisher’s medal.

Bear’s high grade coffee called out to us once again. We returned for another flat white (and noted that it was a busy with a non-cycling clientele – positive for an otherwise deserted Sunday high street).

We were also strong-armed into buying crepes from the stall that Paul had lined up for the event. He needed to justify to the stall owner why he’d been stood there, at the finish, in the cold for over 3 hours.

It actually turned out to be ‘a right shout’. Your classic pancake (let’s call a spade a spade), with lemon and sugar, could well become my ‘go to’ post-ride refuelling strategy (and Science in Sport can kiss my chuddies).

Now, to be fair to sportive organisers, they don’t get much say over the weather. But sometimes it’s as important to be lucky, as well as good.

The riding conditions, if not perfect, were more than clement. It was a cool start, particularly as we queued up to be released onto the roads. Once we got going we warmed up.

It was ideal for bibshorts + leg warmers + Castelli Gabba + base layer + thin gilet + gloves (I get cold hands). It stayed that way throughout.

I maybe had to unzip a little for the grippy climb towards the end, but it wasn’t a case of the day warming up and suddenly I had to strip off (and find pockets to stow everything).

It was relatively calm (wind wise) and no rain. Which has not been the case for every other sportive I have participated in…

(… and other sexy sub-headings).

For the most part (of the short route), the surface was pretty standard for UK rural roads – a few potholes in places, smooth enough to maintain a reasonable pace, hardly manicured blacktop like you might see in Europe. Most of the roads were quiet country lanes.

In fact, that’s the joy of a well-routed sportive, particularly when it’s near your house. I’ve now been introduced to a number of beautiful rural tracks that I can explore again, knit together, form even more great ride routes. You don’t get that when you just ride the same roads you always ride.

The only busy section (which ironically had a lovely smooth surface) was a (very) straight piece of A-road past the Rangemore Estate and finishing at the Needwood roundabout (if that means anything to you). Even on a Sunday morning there were a fair few vehicles passing at speed.

(Assuming the location above means nothing to you, just as a tidbit of interest, this section of the ride passed close by St George’s Park, the training centre for the English Football Association).

For most of the rest of the ride it was fine to ride two-abreast and chat, dropping back to single file (on narrow roads) from time to time when a car needed to pass.

If There Are Just Too Many Words….

… and you want to watch a video (a “YouTube”), those fine people at RideStaffs have you covered (and if you look closely, you can spot me…. in the coffee shop).

Concluding Thoughts (Would I Do It Again?)

In stark contrast to virtually every single sportive I’ve participated in, I unequivocally enjoyed the whole ride. I finished feeling strong. I felt like I’d done a ‘job of work’ but I wasn’t totally wiped out.

Immediately I wanted to come back to do another RideStaffs event, which I’m pretty sure is the reaction that RideStaffsPaul is after.

The early April timing is perfect for a gentle introduction to longer Sportive cycling. The route is relatively benign, with a little poke from time to time. A ride to enjoy and look forward to, rather than to worry about.

You can find out more about this year’s RideStaffs sportives by visiting their website.

Have you ridden your first sportive (or gran fondo) of the season? Or perhaps a long ride with club mates or friends (guess they’re not mutually exclusive)? How did it go?

Let me know in the comments below.

2 thoughts on “Cliffs and Crepes: My Review Of The RideStaffs Spring Forward Sportive 2019”