Generally I try to keep my blog posts focused on helping you achieve your objectives on the bike. I’ve not posted about my saddle-based exploits for ages.

I figure that, for the most part, you’re not interested in the specifics of my training programme (a generous description) or the progress of my cycling fitness.

And you’re just going to have to deal with that.

The Fitness Plan (And Progress)

So you may recall that cycling took very much the back seat from around October 2014 through until March of this year.

I was focused on the renovation of our house (a grand term for doing the painting after the builders had finished doing the real work). The wintry weather hardly compelled me to put a new training schedule into action.

The combination of finally moving in to our new house, surrounded by quiet country lanes, a very mild early Spring and a renewal of my Strava Premium membership jump-started my riding activity.

Those quiet country lanes (viewed from the entrance to our drive):

I started to put together a run of rides, getting out every couple of days or so.

Some were easier; some I gave a few more beans; I started to make the odd foray into the Peak District hills.

Strive On You Crazy Diamond

One of the Premium features within Strava is the Fitness & Freshness chart.

As I wrote about in this post, the F&F chart is essentially a ‘re-imagining’ of Andrew Coggan’s Performance Management Chart (found legitimately within Training Peaks).

(Andrew even turned up in the comments section of that post to confirm that it was his ‘100% idea’… ??!)

That, in a nutshell is what Strava’s F&F chart does – it shows graphically how your fitness is increasing (or not) in response to the rides you log in the system.

Why Did The F&F Chart Help Me?

In a way it’s similar to what I’ve talked about around weight (fat) loss: simply recording and paying attention to something makes you more likely to adapt your behaviour.

In the fat loss arena, My Fitness Pal (a food/calories recording app) and a set of scales like the Fitbit Aria

(which syncs wirelessly with the Fitbit website to record body composition over time) are great ways to avoid fooling yourself about how much you eat and how much you weigh (and the link between them).

Strava and, for me, the Fitness & Freshness chart in particular, is one way of keeping yourself honest on the bike.

What Gets Measured Gets Managed

I can see my ‘Fitness’ line spike in response to a tough ride (which I am pleased with).

Fitness erodes over time – the F&F fitness line starts to trend downwards the day after my ride. If I want to maintain the overall trend of increasing fitness, I need to make sure I ride regularly and with sufficient intensity.

All of which is a long-winded excuse for me not creating, nor following, a training programme.

And to be honest, right now, the lack of a defined training plan doesn’t really bother me.

In all the time I’ve been a ‘road cyclist’, I’ve never really put together more than a few months of consistent cycling activity before life, injury, winter gets in the way. Maintaining my current 2–3 rides a week, monitored with the Strava F&F chart, should do enough to build my fitness for the time being.

Enough guff. Here is the current state of my Freshness & Fitness Chart: 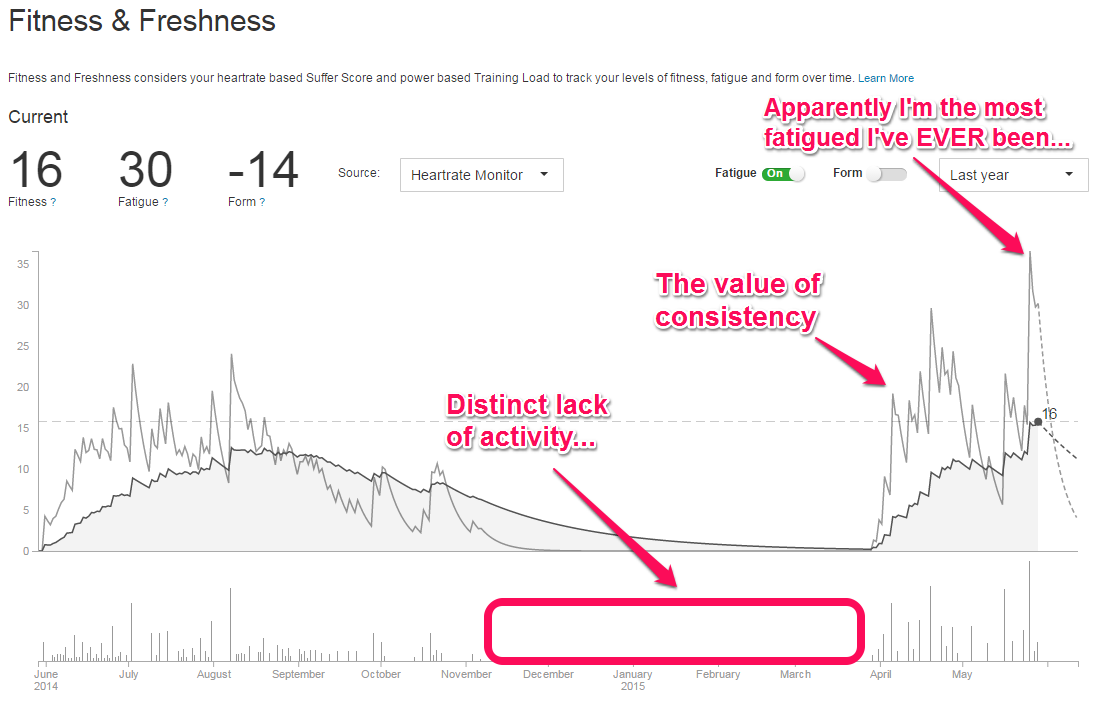 I am 16 fit. Which, on its own, means just about nothing. But the trend appears to be my friend.

Since moving (close) to the Peak District, my long distance ambitions have been stymied by the general lack of fitness and the presence of steep hills (which somewhat get in the way of smoothly clocking up the clicks).

But with the general improvement in fitness and an encouraging hilly 75km ride a couple of weeks ago, this Bank Holiday Monday I set out to cross the (slightly psychological) metric century barrier.

And I wanted to do it whilst ticking off a couple more ‘Greatest 100 Climbs’.

I can’t remember why (I think it was whilst researching the Horseshoe Pass for my Etape Cymru post), but last week I found myself filling in the tables at the back of my ‘100 Greatest Cycling Climbs

’ and ‘Another 100 Greatest Cycling Climbs

There’s space for you to note the date you conquered each climb and how long it took. 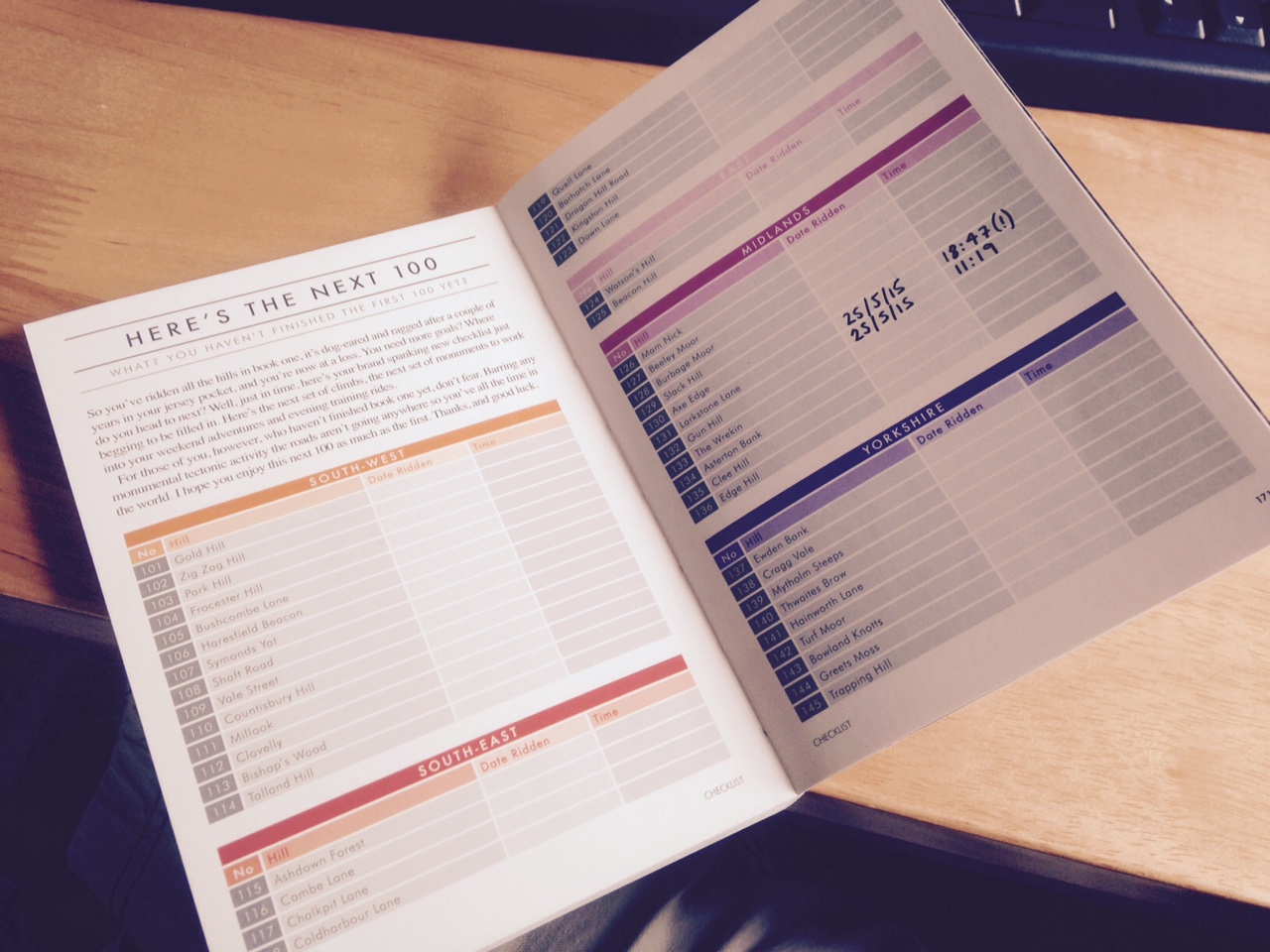 For me this process did not take very long.

Surely I could do better than this.

So I’ve set myself the informal challenge of ticking off a few more ‘100 Climbs’, as and when I can inveigle them into my rides.

It turns out that my recent 75km ride took me very close to my ‘local’ 100 Climb, Larkstone Lane.

(*I didn’t know – or rather remember – because it features in the slightly less well-thumbed second book in the series.)

But my desire to exceed, or at least ride close to, 100km meant that my next closest 100 Climb came into range: Gun Hill.

Gun Hill is also ‘Another Great’ but is more well-known, having featured frequently in the Tour of Britain and also, according to the Rod Ellingworth in his excellent ‘Project Rainbow

‘ (page 88 in case you care), having made Mark Cavendish cry on a training ride.

Gun Hill is north of Leek. It’s easy to get to via the main road from Ashbourne. A slightly more roundabout (and hilly) route is required for cyclists wishing to avoid the heavily trafficked roads. And I’m all for roundabout routes…

Anyway, to put you out of your misery, here is my route on Ride With GPS: 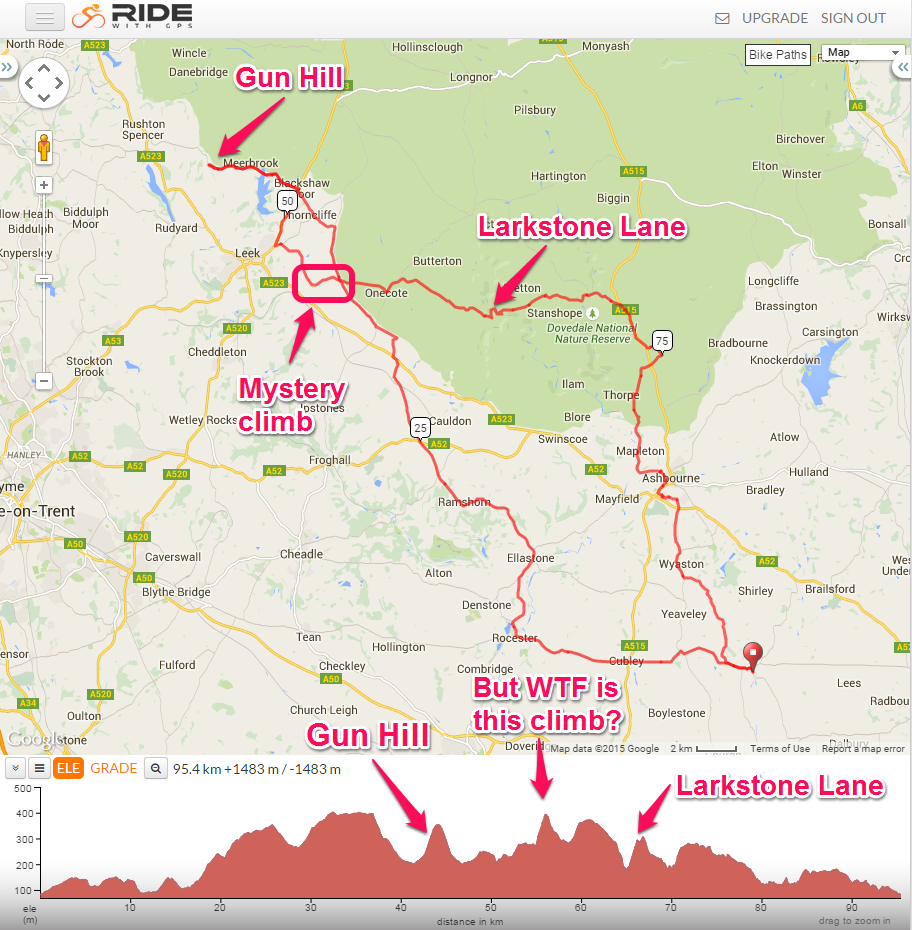 I exported it as a TCX file and uploaded it to my Garmin in the way set out in this surprisingly-popular post.

(The eagle-eyed will note that this route is not quite 100km in length. Correct – I tacked on an extra few kms at the end to get up to the century ride).

Here is the ride recorded on Strava. Boom! Apparently I underwent ‘Extreme Suffering’….

Simon Warren (the 100 Greatest Climbs guy) rates Gun Hill a 5 out of 10. That’s probably about right.

I didn’t have an immense sense of achievement from having got to the top. The road surface is okay-ish. The flat approach road at the bottom (past Tittesworth Reservoir, fnar fnar…) has a pretty terrible surface, considering you’re riding it at reasonably high speed. The views are nice enough. 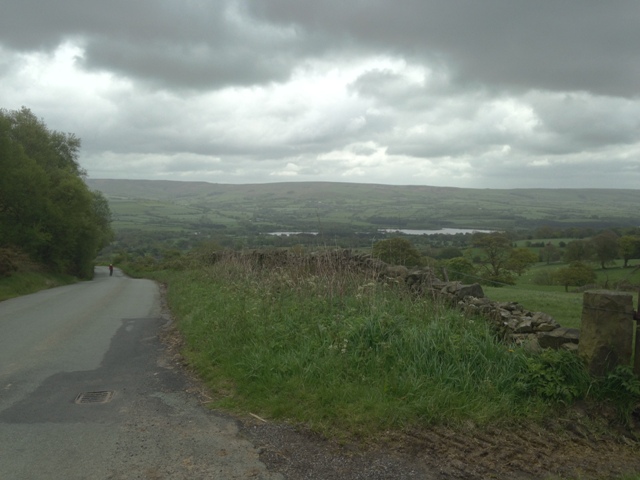 Perhaps Gun Hill is one of those climbs (like Alpe D’Huez dare I say it) that derives more importance from the races that have taken place upon it, rather than having a particular intrinsic appeal.

It seems I’m not selling this one very well.

Anyway, the vital statistics, according to Strava:

The current Strava King of the Mountain rode up Gun Hill in 5 minutes 41 seconds. I managed 11:19. Room for improvement.

Unlike Gun Hill, Larkstone Lane has no racing pedigree at all (as far as I’m aware).

It’s also somewhat out of the way, with loads of great, easier to find climbing all around it.

Still, it’s in the book, so I wanted to ride it.

Larkstone Lane was the 6th significant climb of the day, coming at around 66km into my ride. Fresh I was not.

I was, however, delighted to be confronted with this prospect of pain from all the way across the other side of the valley: 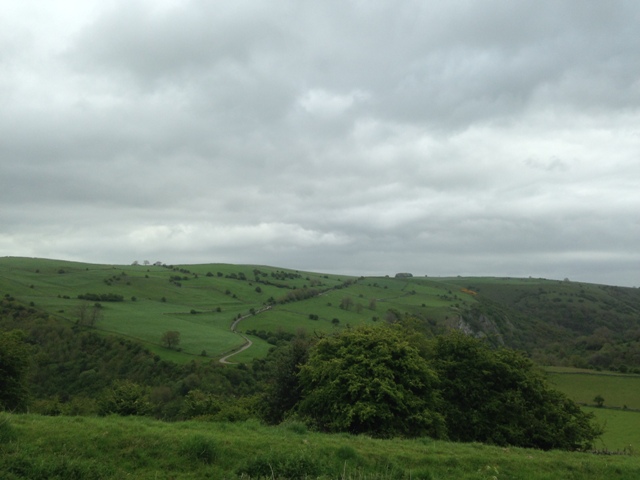 As it turned out, this photo didn’t even capture the steepest section…

The climb starts in the bottom of the Manifold Valley, just after this bridge:

After the cattle grid shown in this next photo, you’re thrown straight into 20%+ gradient hairpin hell: 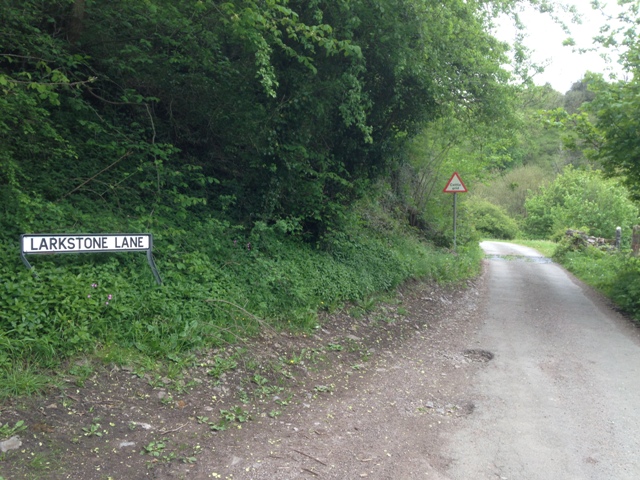 After the initial panic that the entire climb might be like this, the gradient eased off and I started to feel that I might actually be able to make it to the top without a foot fault.

That is, until these fuggers turned up: 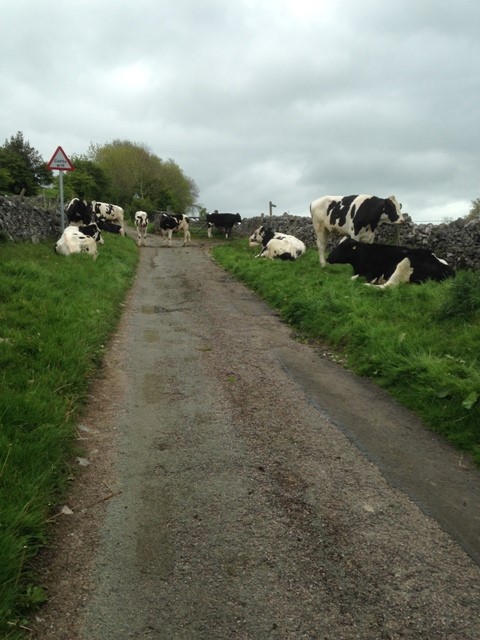 Now I was pretty sure that these girls didn’t have calves around (countryside tip: stay away from cows with calves – they’re very protective). But I wasn’t going to take the chance of out-running an inquisitive nudge whilst tackling a 20% gradient. Also two of the fuggers were in the middle of the fugging road…

As I climbed off my bike to ruminate (I said ruminate), I felt my KOM winning time slipping away. I freewheeled back to a lower section of the climb to consider my options (off road through the fields, back down to the bottom and up the way I’d come).

Luckily, after 5 minutes of demi-despair, a car came along. Given I was 100 metres from the cows, the occupants of the car must have assumed that it was the climb itself which had waylaid me. That stung.

I was starting to get angry.

The rage built and built until, with the car having cleared a small passage through the blundering bovines, I pressed pedal (showing my mettle) and set off like a bat out of f’ing hell up that slope. I like to think I screamed up that section of the climb like Marwood on a bike.

A coward you are Montgomery, an expert on bulls you are not

Simon Warren suggests that the climb should be ridden in approximately 9 minutes. Presumably he didn’t have to deal with a herd of cows.

Despite the fecking Friesians, I did actually enjoy Larkstone Lane. It’s enveloped within beautiful scenery. It has a hairpin or two (we all love hairpins). The gradients are challenging.

The question is, with the risk of future timed attempts being kaiboshed by more massive milkers, would I attempt it again? Dunno.

Whatever. The stats (again according to Strava):

I note that Gun Hill and Larkstone Lane have the same average gradient. The latter definitely has considerably steeper sections.

I assume that the flatter section at the top (with a little bit of gentle downhill) evens things up.

Douse Lane should perhaps be a candidate for ‘Oh No, Not Another 100 Greatest Cycling Climbs’ (working title).

I discovered it accidentally (via my RideWithGPS route planning) as a result of needing to get back from Gun Hill to my next target climb (Larkstone Lane), but not wanting to retrace my Gun Hill approach route.

I had a sense it might be quite good* when it turned up on the RideWithGPS elevation chart, looking somewhat more challenging that either of my target climbs (see screenshot above).

(*Of course I mean hellish)

The sense of foreboding didn’t lessen when the earlier part of my route gave me the opportunity to look down the top section of the climb from the summit (and I hadn’t see the 17% gradient sign at that point…).

Nor when I looked at the elevation chart on my Garmin:

Of all the climbs on this ride, Douse Lane was definitely the steepest.

Here is the segment on Strava, with the highlight stats being:

The climb gains just 7 fewer metres of height than Larkstone Lane, but does so in almost half the distance.

Road signs warn of 17% gradients. On the inside of the bends it’s probably 20%+. It was muy dificil.

In the absence of an official ‘Greatest Climbs’ rating, I give Dowse Lane a 7 out of 10.

So there we have it. I appear to be getting fitter. I had a nice ride on Bank Holiday Monday (despite having good reason to join the Badger Appreciation Society).

I doubt any of this will help you in your cycling endeavours (though I do recommend the Strava F&F chart, if that’s your bag). Maybe one or two of you may be inspired to come ride in my part of the Peak District. Let me know if you do.

Until next time, safe cycling and forza!